December 19, 2018 officially marked the one year anniversary of my hysterectomy surgery. The surgery included the removal of my bicornuate uterus (that means two uterus, yeah… because one wasn’t enough for me), both fallopian tubes and cervix. I’ll state this in the off chance that I have any male readers, but yes, I still have a vagina (a friend legitimately asked me this and I thought it was just so cute of him to be concerned that I would sign up to have my vagina removed). I also still have both ovaries intact because there was no need to remove them and I didn’t want to experience menopause just yet, I’ll leave that one to nature.

In honor of the one year since forsaking my womanhood, purpose and only tangible value for existence, I thought it was the perfect time to write about the post op.

It took me just about the entire six weeks to physically recover from the surgery. I had two very pink scars about the width of the tip of my pinky on my low abdomen. The pinkness faded throughout the year and are barely noticeable as of now.

The rule as set by my surgeon was absolutely no penetrative sex for six weeks. I’m going to tell any woman who decides to pursue this surgery to adhere to this rule strictly because anyone who would ignore such common sense would be a fool. I am going to pretend that I am not one of those idiots… Anyway. Fully recovered, sex is still just as enjoyable as before the surgery (as mentioned above, vagina is still there and functioning as well as could be expected).

As of today, I have no pain. From memory I recall having mostly just tenderness in the low abdominal area for another couple of weeks after the recovery period but nothing that required medication.

The first few days after surgery were very painful, mostly stemming from the severe abdominal bloating from the gases used to inflate the belly during surgery. You can see the belly bloat in the picture below. 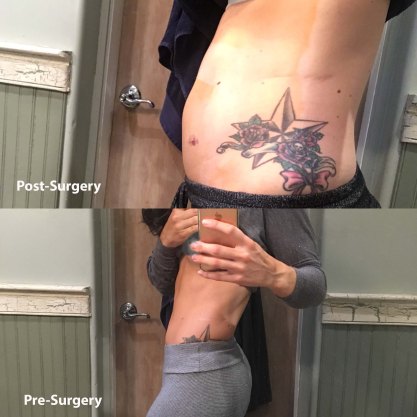 Once the bloating subsided I didn’t use the pain medication prescribed anymore. The beginning of the day I felt much better, but by evening the soreness would set in. That lasted for about a month in total.

I did lose a lot of my physical strength. As some of my readers know I am a personal trainer and I stick to my own training regimen quite thoroughly. Regardless that it was to be expected, being set back because of the surgery was something I did not enjoy. To be truthful, I was back in the gym far sooner than my surgeon would have approved and being back had me more motivated than before to take care of my body.

I believe it was week three post op that I was back to exercise, taking it very very easy. I did not lift heavy weights for the full recovery period, I did short bouts of light cardio. That on its own was exhausting. I started incorporating lighter weight exercises at about four weeks post op. The hardest part to recover was my core strength, I found myself struggling with novice abdominal exercises.

Again, this isn’t something I advise anyone who goes through a surgery, it’s always best to follow the surgeon’s orders, but I’m a bit of a rebel and exercise for me is a part of my regular routine and it felt good to get back to it as soon as I could. I had someone with me at all times and I listened to my body, if something started to hurt or I got too tired, I would stop.

No birth control and the crazy side effects that come along with that. No periods. I did have some residual bleeding from the inner stitches on my cervix until the sixth week. Again, adhering to the surgeon’s guidelines is highly recommended.

Why did I choose to get a hysterectomy at 27-years-old? I knew that having children was something I didn’t want. I’ve never felt that urge or calling. And because I have never foreseen that future, dealing with the physical ailment of womanhood held no appeal for me. I always had horrible experiences with my menstrual cycle, irregular bleeding, intense cramping and bloating. I decided I did not want to deal with it anymore. When I was told about my bicornuate uterus and the likelihood that I would miscarry or stillbirth if I were to ever get pregnant only added to my resolve.

It took me years to find a surgeon who would perform the surgery and maybe that was a good thing. The time, perseverance and patience only further reinforced the decision. At last, after two years of being turned down, in 2017 I found an amazing and understanding surgeon who held no ethical qualms about performing permanent sterilization on a young and healthy woman. I did have to convince her that this was not some rash or irrational decision, that this is and had been my default and that I was fully aware of what I was sacrificing and that I was accepting of the fact that I could potentially come to regret it.

I will be entirely open to the experience, from time to time in the last year I find myself thinking about the choice, the unavoidable ‘what ifs’. Would I change my mind? In five years would I want a child of my own? Will I hate myself for this decision? I don’t have a therapist, I don’t have a group of women with the shared experience, I genuinely find this to be normal to contemplate.

How do others react to the news?

My family and loved ones have fully supported me throughout the entire experience and are more than happy for me. But for most people, to be confronted with a young healthy woman choosing such a drastic form of birth control is unfathomable. When I say I’ve had a hysterectomy, nine out of ten times, women immediately console me with condolences and sympathy. When I explain that it was entirely by choice, they be like…

Then cue the quick cover-up, the awkward proverbial backslap of approval. I’ve gotten, “well when you know, you just know,” or the blatant dismissal of my decision; “you can always adopt.” Most women just don’t understand how I could make such a permanent decision at such a young age.

And men, well men just don’t understand any part of it which is fine with me. As if I would expect them to grasp any part of womanhood or the forsaking of.

A year without the anxieties of the pill, the period, the pain and discomfort, the frightening thought of the stick with a positive result, the many many pairs of ruined panties and sheets and embarrassing mattress stains, well there’s just only one way to express my feels on that…

My name is Ali. I am 31-year-old, single, barren spinster and reppin' it proudly. I’ve lived all over the U.S. from the East Coast to West. Born just outside of Los Angeles, raised in New Mexico and currently residing in Texas. When I’m not working, I spend my time grabbing drinks with friends, dancing, reading, seeing movies and consuming a concerning amount of chocolate. I’ve experienced a seasoned three decades, with many ups and downs, and it's given me the useful tool of perspective. I have a knack for communicating and enjoy doing so. Welcome to the blog. View all posts by Ali Griego